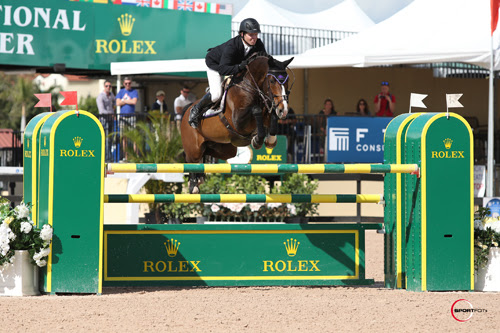 Great Britain's Robert Ellis set the speed track for 70 entries in Friday's $34,000 G&C Farm 1.45m with 20 clear rounds. Beezie Madden and Abigail Wexner's Vanilla set the pace early on in 67.19 seconds to eventually finish third. Darragh Kenny and Postage Stamp Farm LLC's Prof de la Roque improved on the time in 65.62 seconds to earn second place honors. They held the lead for 40 rounds before Shane Sweetnam and Cyklon 1083 cleared the course a full second faster in 64.62 seconds for the win.

Sweetnam and Cyklon, a 13-year-old Swedish Warmblood stallion by Cardento x Cortus, also won the $34,000 G&C Farm 1.45m at the beginning of week three during this year's FTI WEF. The pair was extremely close to a victory earlier this week as well in Wednesday's $34,000 Spy Coast Farm 1.45m, but finished a close second to McLain Ward and Wings. This time, Sweetnam noted that he had the advantage of a course that was very suited to Cyklon's strengths of speed and tight turns.

"He has had a good week," Sweetnam stated. "He was unlucky not to win the class on Wednesday, but McLain did a great job. There was one place that I thought I lost time, and McLain definitely took advantage of it. Today I watched a couple go. I didn't get to see Darragh go, but it looked like a fast time, especially since I saw Tiffany (Foster) go and she was really moving. I had a plan, and he did a great job. We stuck to the plan, and we executed it as well as we could."

"He is a very quick horse rolling back on the jumps," Sweetnam explained. "Bob Ellis normally likes to have a lot of rollbacks, even in his grand prix courses, so it definitely played to my advantage with him. You can really turn back tight with Cyklon, and he always tries to leave the jumps up."

Sweetnam spoke more about Cyklon, noting that the beautiful stallion is very well-behaved at home and at the horse show and has a fantastic drive to win when he gets in the show ring. 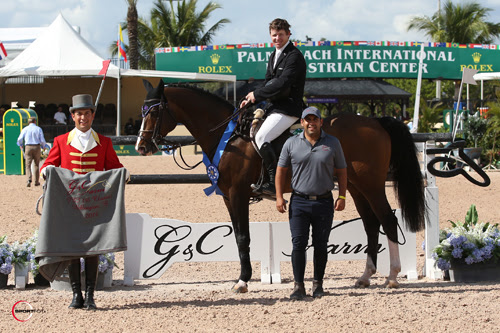 Cyklon is done showing now for week five and will have some time off. Sweetnam has not yet decided what week Cyklon will show again, but explained that he tries to keep his top horses on a good rotation to keep them feeling fresh.

"He had the week off last week," Sweetnam noted. "He had done two weeks in a row before that, so he needed a week off and Solerina went last week and she did great. I try to rotate them as much as I possibly can, those two, because they are both winners."

University of South Carolina's Katherine Schmidt Tops Collegiate Equitation Championship
Twenty one-year-old Katherine Schmidt, of Ridgefield, CT, emerged victorious from the Collegiate Equitation Championship on Friday evening at the FTI WEF. Schmidt is a junior at the University of South Carolina (USC), where she is a double major in Marketing and Management.

Schmidt made it through the first round of the evening's competition after beating out Auburn University's Christina Lin. Schmidt rode David Raposa's Chanel to a 76 to advance to round two. Schmidt secured her trip to the final round with a score of 87 aboard Ashleigh Stewart's Coco, jumping past Baylor University's Samantha Schaefer. 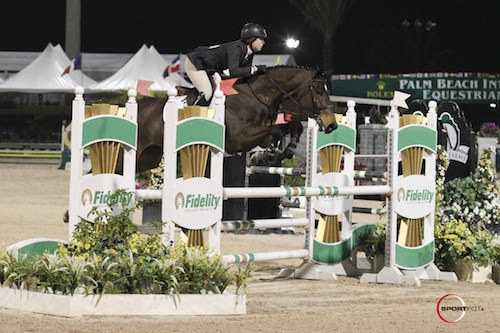 Schaefer was also awarded with the Professionals for NCAA Equestrian High Score Award for her first round score of 90 with Ilan de Taute, owned by Alan Chesler.

The Collegiate Equitation Championship pits the nation's best varsity level collegiate riders against each other in a head-to-head competition. Riders are organized into brackets, where each bracket must each complete a course on the same horse, which is unfamiliar to them. The rider with the highest score on that horse advances to the next round.

Schmidt, affectionately known as "Schmidty" to her teammates and coach, put in consistent rounds throughout the night before laying down an incredibly handy final course with Striptease.

"I saw Sam go and [Striptease] got a little quick, so I thought I could manage her here and there and try to slip inside [for a few of the turns]. I think I was able to get her back a little bit early and do the inside turns, which I think set me apart from Sam at the end of the day," Schmidt commented.

Schmidt had total confidence in her final round mount, a 15-year-old Royal Dutch Warmblood mare, despite never getting on the horse before entering the International Arena Friday evening.

"Striptease knows her job. She was happy to be out there. It was nice to kind of relax a little bit and try to show off," Schmidt explained. "She's been around the block I think. She was a little bit downhill, so I had to pick her up a little bit, but she was very sweet and would jump from anywhere."

Schmidt was born into a family of horse lovers; her mother had horses all her life and Schmidt described being born with ponies in her backyard. By the time she was a toddler, she was already in the irons. After showing ponies throughout her childhood, Schmidt went on to the equitation and jumper divisions.

"I started doing jumpers with Darren Graziano. He gave me a lot of rides, and he taught me a lot. He introduced me to Andre Dignelli [of Heritage Farm], and I did my equitation years with him. I have a lot to owe to both Darren and Andre for getting me to where I am," Schmidt expressed. 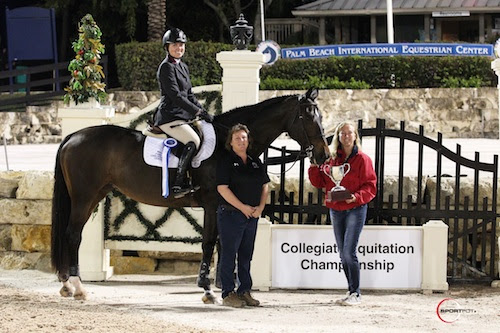 "Schmidty's just a great person. She's a really hard worker. She's always the one that's going to be practicing extra and trying to be better. She's very modest. I think she rides beautifully, and I can't say enough nice things about her. She's definitely someone that deserves this kind of win," Gwin smiled.

A testament to Schmidt's humble character is the fact she failed to mention she's undefeated this season for the USC Gamecocks. Gwin revealed she's yet to be beat, with her record currently standing at 8-0 before her victory in Wellington.

While Schmidt and her teammates will hit the road to take on the University of Georgia on Saturday, the Taylor Harris Insurance Services (THIS) Children's Medal will kick off hunter competition for the weekend at the FTI WEF. Jumper action continues tomorrow with the highlight of the week, the $370,000 FEI World Cup™ Qualifier Grand Prix CSI-W 5* presented by Rolex, at 7 p.m.

For full results, go to www.showgroundslive.com.