Wellington, FL - March 30, 2014 - Ashley Holzer (CAN) and Marissa Mastranardi's Tiva Nana picked up their second win of the weekend in the FEI Grand Prix Special CDI 3*, presented by Diamante Farms, during the AGDF 12 CDI 3*/5* at The Stadium at Palm Beach International Equestrian Center. Fellow Canadian Chris Von Martels and his own Zilverstar concluded competition for the weekend with a win in the FEI Intermediaire-1 Freestyle, presented by Wellington Equestrian Realty. The classes wrapped up an incredibly successful season of the 2014 AGDF. 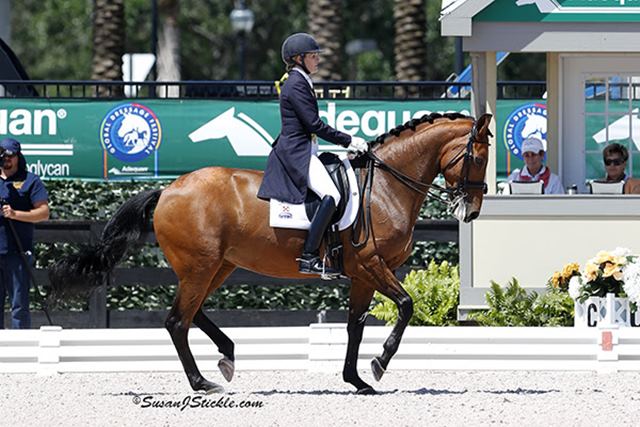 Holzer and Tiva Nana, a 14-year-old KWPN mare, finished first in the FEI Grand Prix Special CDI 3* with a score of 71.922%. Second place went to Lars Petersen of Denmark and Willano for their score of 69.608%. Christilot Boylen (CAN) rounded out the top three with a score of 67.275% aboard Hudson 18.

Holzer was overcome by Tiva Nana's performance on Sunday afternoon after a long weekend of showing. "She's an incredible horse. She works for me in that ring. She was a trooper. A fun, fun, animal to ride and I feel very lucky to ride a horse like her. She really connects to you. She knows who you are and really wants to do well for you," Holzer shared.

Overall, Holzer was pleased with their test and felt it was much cleaner than their previous special two weeks ago at the AGDF. 'Nina' was much more focused this week, and Holzer decided to lighten up on the aids.

"Last time, I was not so clean," Holzer admitted. "It's a little tough, because she's so green that you don't want to give such a small aid that she doesn't know what she's doing, but if you over-aid her, which I did last time, [it won't go well]. It's having the confidence to sit and give tiny little aids and trust that she'll be able to do it. I just said, 'Okay, I'll trust in you. You go and do your job.' And wow. She felt unbelievable."

Like Michael Barisone with his ride earlier in the week with Ellegria, Holzer has been shocked by her horse's quick progression in the upper level tests at the AGDF. "I'm speechless, frankly, to feel a horse work that hard and do that much. I was just trying to sit still! She was really hot today, and I just sat still. I wasn't even asking for her to do more, that's just all her trying," Holzer explained.

Of her future plans with Nina, Holzer added, "We're just going to have to take a look at what the next plan should be. It's important that when you have a horse like that, that you look to the future, but without greedy eyes." 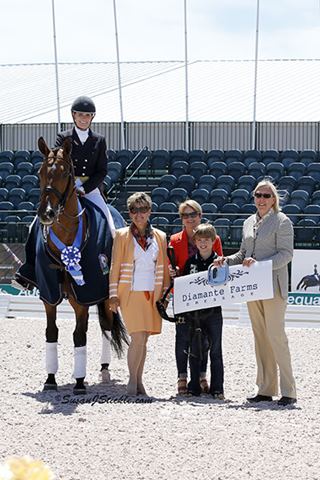 Ashley Holzer and Tiva Nana at the winning presentation © SusanJStickle.com

For second place finisher Petersen, Willano is another horse he has brought back from a long lay-off. After having a large melanoma tumor on his neck, the gelding was out of work for two years after already debuting at the grand prix level.

"He did his first CDI two weeks ago, so he's green," Petersen acknowledged. "[I'm very pleased with him].He needs to be a little fitter, in a little better shape. In the grand prix, especially, I ran out of energy a little bit, but he was better today. I just did a little bit yesterday with him, so that helped."

While they may have similar storylines of posting great comebacks after injuries, Petersen said that Willano and his 5* mount Mariett could not be more different.

He continued, "I won a lot on him in the small tour, and there he was actually [brighter]. He was in [great] shape then, so I just need to get him more fit after his lay-off. I think it will all come back. I'm very, very happy with him."

Chris Von Martels was the second Canadian to take a victory lap on Sunday at the AGDF, winning the FEI Intermediaire-1 Freestyle, presented by Wellington Equestrian Realty. Von Martels rode Zilverstar, his ten-year-old Dutch Warmblood gelding, to a high score of 76.333%. Second place went to American Christopher Hickey and Ronaldo for their score of 74.750%, while Canadian Shannon Dueck picked up third place on Cantaris with a score of 71.333%. 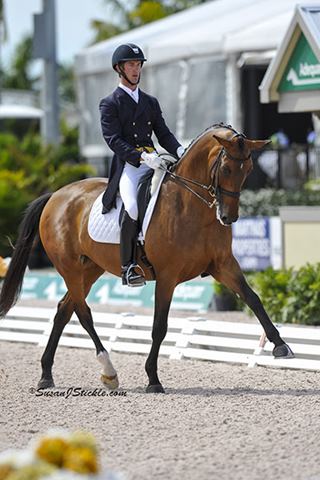 Sunday's score was the best yet for Von Martels and Zilverstar, who he felt went incredibly well in the test Sunday afternoon. Sunday's performance made Von Martels increasingly excited for what is to come with Zilverstar.

"Throughout the whole program, he was very energetic and definitely showed his highlights very well, which I believe are a lot of his trot work as well as his canter and changes. What I've always loved the most about him at the show is that he's very enthusiastic to go in the ring and perform," Von Martels said.

Von Martels' choreography was set to a medley of songs from his favorite band, U2. In addition to personally liking the musical arrangement, produced by Jos Peters, Von Martels believes it suits his horse well. The familiarity of the music also helps put on a good show for spectators and judges alike.

Of his choregraphy, Von Martels shared, "What makes it difficult is that I do a lot of longer lines in the half passes and with a lot of power. I can really show the horse's ability and show off his real talent. Most of the degree of difficulty gets increased, that I was able to ride this full power throughout the test."

Zilverstar had a stand-out performance on Sunday, but Von Martels is thrilled with how the entire AGDF season has gone for the two of them. Besides Sunday's personal best, winning a silver medal as part of Team Canada during the Stillpoint Farm CDIO Nations Cup was a major highlight for Von Martels.

"He did very well from the beginning of the season on. He steadily improved throughout the season, and I would like to put a little bit of credit to that we have so many shows available [at AGDF]. Your horse can go to the shows week after week and be able to stay focused and improve," Von Martels pointed out.

He continued, "He's still relatively new to me as far as competition goes. Our ultimate goal with all of our horses is to bring them to their maximum potential. That takes a lot of time and experience, both at home training and at the show. I would say that my goal is always to help them shine as best as I can, and I think today's result I'm quite happy with. I think we kept that goal." 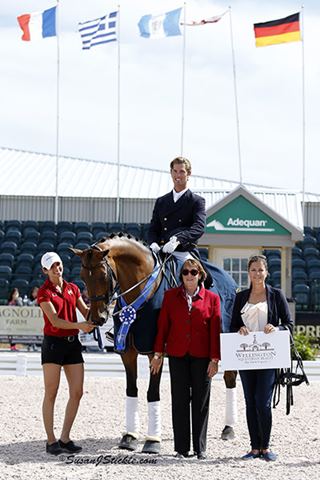 Chris von Martels and Zilverstar at the winning presentation
© SusanJStickle.com

The long-term goal for Zilverstar is to advance to grand prix, but Von Martels is still unsure of when that will be. The pair will travel to Holland to compete over the summer before returning in the fall to Wellington in preparation for the 2015 AGDF.

Competition for the 2014 AGDF concluded with Von Martels' win, along with a full day's schedule of national and international competition. For full results and more information, please visit www.globaldressagefestival.com.