Wellington, FL - February 27, 2013 - The FEI Nations Cup (now the Furusiyya FEI Nations Cup™ presented by G&C Farm) has been a featured event at the FTI Consulting Winter Equestrian Festival since it was first added to the competition line-up back in 2002. Thanks to the generous sponsorship of Hollow Creek Farm, competitors in the Children's, Junior and Young Riders divisions can look forward to competing in their own marquee Nations Cup events.

The overwhelming popularity of team competition is not just for senior riders anymore; now young up and coming riders of all ages can participate and get a taste of what possibly awaits them as their careers progress. On Saturday, March 2, three separate Nations Cup events will be held at the Palm Beach International Equestrian Center in Wellington, Florida.

Argentina, Brazil, Canada, Colombia, Dominican Republic, Mexico, the United States, and Venezuela will all field teams for the Nations Cup team competition while Chile, Peru, and Sweden will be represented by individual competitors.

Hollow Creek Farm's interest in encouraging young athletes to experience riding in a team format stems from its star pupil, Emanuel Andrade. At 15 years of age, Andrade swept the junior divisions at last year's FTI Consulting Winter Equestrian Festival. Competing against riders who were several years older than him, Andrade claimed 23 victories and took home no fewer than 18 Championship and Reserve Championship titles.

An active competitor in his native Venezuela where he balances school work with riding, Andrade had the opportunity to compete in a team event for young riders in Ecuador in 2011. The same year, Andrade was a member of the winning Pro-Am team in the FTI Consulting Great Charity Challenge at the FTI Consulting Winter Equestrian Festival, riding alongside Venezuelan Olympian Pablo Barrios and Luis Fernando Larrazabal. Eager to continue exposing Andrade and his talented peers from around the globe to the challenges of team competition, Hollow Creek Farm eagerly supported the new Nations Cup initiative.

Just as in the $75,000 Furusiyya FEI Nations Cup™ presented by G&C Farm, which will be held on Friday night, March 1, teams of four riders each with the best three scores to count will represent their countries in the Nations Cup events for Children, Juniors, and Young Riders.

"The idea is to begin to set the groundwork for young riders to compete together as a team," said Hollow Creek Farm trainer Angel Karolyi, himself a member of the Venezuelan team at last year's Nations Cup event in Wellington. "It gives them the opportunity to experience the team format before they reach the top levels of international competition." 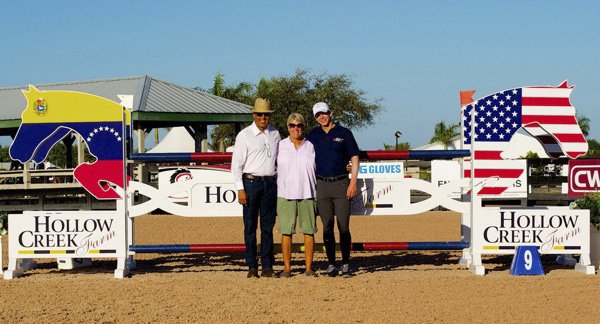 Karolyi operates Hollow Creek Farm of Aiken, SC, with business partner Andrea King. Only 26 years old, Karolyi understands both the benefits and the challenges of competing as a team member, and the extra pressure it brings. It is a learned lesson he's applied as a member of Venezuela's Gold Medal Team at the 2010 Central American and Caribbean Games in Puerto Rico, as well as at the 2011 Pan American Games in Guadalajara, Mexico.

"It is very important to expose these young riders to the responsibility of not only performing well for yourself, but for others who are relying on you," explains Karolyi.

Enter the new Nations Cup series, designed specifically for the next generation.

"It is really exciting for us to be a part of this wonderful new program, which is so innovative and unique," said Karolyi. "We are proud to be able to support both the sport itself and the young up-and-coming riders who are the future of show jumping. There is no better showcase for this type of event than at the FTI Consulting Winter Equestrian Festival."

Mark Bellissimo, the CEO of Equestrian Sport Productions, thanked Hollow Creek Farm for its support and said, "It should be exciting for all involved. I believe this is the first time that an international show has offered all four levels of Nations Cup competition within the same show. We will be promoting the event to an international community while, at the same time, showing our commitment to the growth of the sport and the teams of the future."

In addition to the Nations Cup events, Hollow Creek Farm will also sponsor special Children's, Junior, and Young Riders' Classics on Thursday, February 28, in the International Arena during CSIO Week. Hollow Creek Farm is also the weekly title sponsor of the Medium Junior Jumper division for the duration of the 12-week FTI Consulting Winter Equestrian Festival.

"We are very excited for the inaugural Hollow Creek Nations Cup, and we wish all of the competitors the best of luck!" said Karolyi.

The 2013 FTI Consulting Winter Equestrian Festival has 12 weeks of top competition running from January 9 through March 31. The FTI WEF is run by Equestrian Sport Productions, LLC, and Wellington Equestrian Partners and held at the Palm Beach International Equestrian Center. All 12 shows are "AA" rated and Jumper Rated 6, and more than $7 million in prize money will be awarded.