Wellington, FL - March 30, 2014 - Molly Ashe-Cawley of Newtown, CT, rode Kennzo to the top of the $50,000 USHJA International Hunter Derby on the final Sunday afternoon at the FTI Consulting Winter Equestrian Festival. Kennzo and Ashe-Cawley's win wrapped up the last week of the FTI WEF, presented by FTI Consulting, after 12 weeks of top-notch competition.

The hunter derby consisted of two rounds over fences over two days of competition, with the top 25 being called back for the final handy round in the E.R. Mische Grand Hunter Arena at the Palm Beach International Equestrian Center (PBIEC). Ashe-Cawley and Kennzo sat in third place after round one after earning a total score of 178 from the judges. She and Kennzo laid down a round worthy of a second round score of 193, totaling 371. 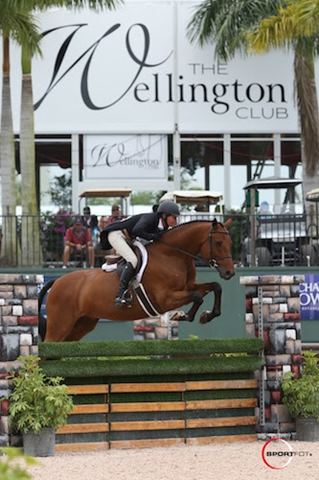 In a highly unusual scenario for the hunter ring, Ashe-Cawley's second round score tied her with eventual second place finisher Kate Ross, who earned scores of 172 in round one and a high score of 199 in the handy round with Friday Night. The tie resulted in a jump-off round, but after an unfortunate rail, Ross had to settle for second. Christopher Payne rounded out the top three aboard Walk This Way with a total score of 369 points.

Ashe-Cawley was quite pleased with both of her rounds with Kennzo, a 12-year-old Finnish Warmblood gelding (Anita x Coriano) owned by Kristen Abbatiello-Neff.

"Yesterday he was super," Ashe-Cawley said. "They made a very exciting course today that had us all quaking in our boots today. I thought he was good in the handy. I didn't get the inside turn after the one line that I wanted to get to the trunk jump. He was great; he was with me the whole time, did his part perfectly."

A tricky course designed by Maryland's Ken Krome led to competitors taking on several variations of the course. A tight inside turn to one of three high options for the course had many opting for the lower height. Sandy Ferrell tried a longer approach to the high option with Mayfair in the round before Ashe-Cawley, but after Ferrell lowered a rail, she decided to go for the lower option with Kennzo.

"I don't know if it helped me or hindered me, but I definitely took the low option. Not that Kennzo usually knocks a jump down, but the way our week has been going, it could have happened," Ashe-Cawley acknowledged. "I wanted to do the inside turn to the trot jump, I even got up in the (nine strides) easy, but there was no chance. I would have become one with the standards of that number two jump! So I figured rather than be a bug on the windshield, I would go around."

Second place finisher Ross was thrilled to be in the company of two highly-regarded professional riders. The junior rider admitted to being a little bit nervous going into round two being in seventh place, but Ross and Friday Night, owned by KAR LLC, excelled under pressure to jump into the top three with a win in the handy round.

"I was so happy! I was really nervous going in because I did better than anticipated yesterday, so I was feeling a little bit of pressure. But coming out I was so excited, I just felt a huge relief. My horse is amazing," Ross beamed.

Sandy Ferrell had the ride on Friday Night for the first year of his derby career, which set him on the path to success with Ross. Ross took over the reins at last year's hunter derby at FTI WEF as well as the hunter derby at the Old Salem Farm Spring Horse Show. 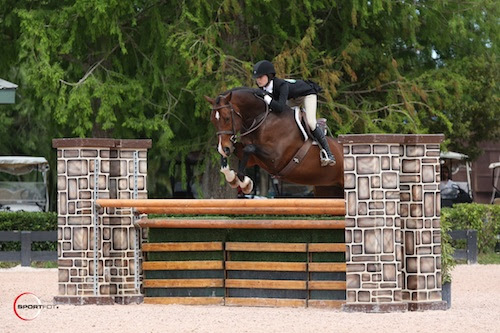 "Sandy did an amazing job getting him set and getting me comfortable with it. I've been doing them sporadically, but he's so good at it that he doesn't need to practice much," Ross described.

Ross had to go first in the jump-off round, which she admitted caught her a bit off guard after breathing a sigh of relief after her handy round, but she did her best to replicate their success on the second time over the course.

"I was planning to just take the exact same track because everything kind of magically turned up the first time, and he went so nicely, so I was just hoping I could do the same thing again and just put in a solid round," Ross explained.

Christopher Payne was incredibly happy with Susan Moriconi's Walk This Way in both rounds of the derby. The horse was sidelined with an injury over the last couple of years, but has triumphantly returned to the show ring with Payne.

"He's just kind of started getting back in the game," Payne said. "I thought today with the crowds, everybody being so good, the horses and the team, you had to do the high options. He was game for it, very confident. I'm very pleased to see this happening."

Walk This Way returned to the show ring during World Championship Hunter Rider (WCHR) week at the FTI WEF, where he finished fifth in the $100,000 Peter Wetherill Palm Beach Hunter Spectacular. 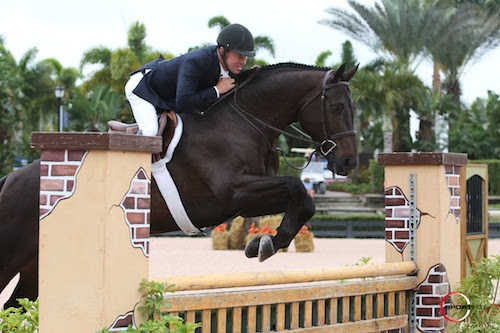 "The night class really made me think, he's a contender for the pressure classes. Then when I did a derby [last week], I saw how he was good with the handys and things like that. I thought I'd try it, and I could change the plan at any time," Payne shared.

Of their course on Sunday, Payne concluded, "I kind of tried to do some high options to get definite points, but then I tried to tidy up turns which weren't necessarily inside turns, but keeping it a little tighter to get some handy points. I was really happy with him."

Sara Ballinger of Marion, OH, won the Beval Palm Beach Adult Medal Final on Sunday morning at FTI WEF. It was the second equitation win this weekend for Ballinger and Wanderprinz, a 12-year-old Hanoverian gelding by Wanderkoenig. The pair also won the Ariat National Adult Medal on Friday morning. Second place in the class went to Victoria Birdsall and RMF Voka D.N. Rachel Boggus of Indianapolis, IN, took home the overall series championship after placing third in the class on Sunday with Papillon 136. 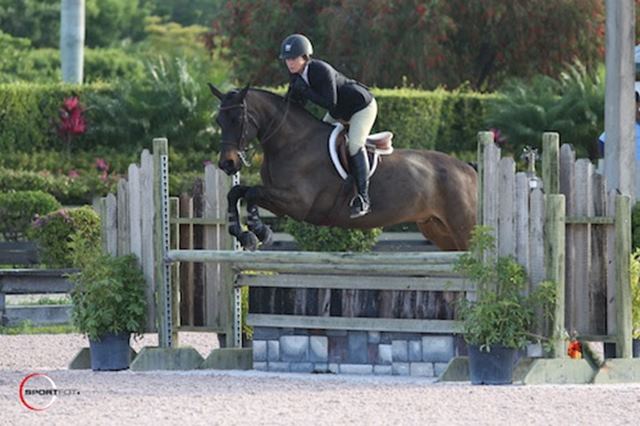 Boggus and Papillon 136, her 17-year-old Dutch Warmblood (Lundy x Guidam de Dartay), topped the series standings with 92 overall points, while Ballinger was second with 60 points aboard Wanderprinz. Nicole Lyvere was third overall with 36 points on her horses Fabrege and Bonaire.

For her winning ride, Ballinger was presented with a bridle and picture frame by Kris Livengood of Beval Saddlery. Ballinger was thrilled to end her FTI WEF circuit on a high note, especially since she had never won the Beval Palm Beach Adult Medal Final before.

"It was great, I'll take it! It's a tough class, and it's a tough show. It's a long show, and it's a lot of work," Ballinger smiled. "We feel good. We paced ourselves throughout the circuit." 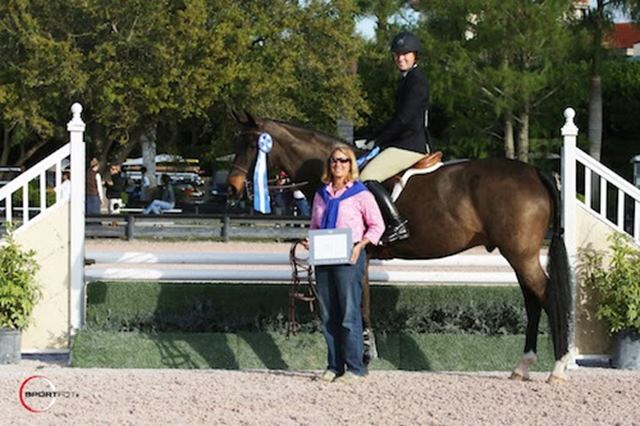 Sara Ballinger and Wanderprinz in their winning presentation © Sportfot

Ballinger will head back home to Ohio with Wanderprinz and her other horse, Pizarro, where she juggles taking care of her horses herself with her full-time job as an appraiser. Fortunately, her hours are flexible and she can schedule her work around horse shows, where she meets her trainer Lourdes De Guardiola.

Of Wandprinz, Ballinger added, "He's really smooth. He's pretty straight-forward on the flat. He's always had a good flatwork ethic and a good base. He's a sweet guy. He's straight-forward, really fun on the flat. The fences worked out really well today. I had a plan from the beginning and just stuck with it."

Boggus, who trains with Abby Blankenship, was equally excited with her results on Sunday morning. After coming up short in the overall standings in 2013, she had her eye on the overall prize. Kris Livengood of Beval Saddlery presented Boggus with a custom Butet saddle for her winning ways throughout the circuit. 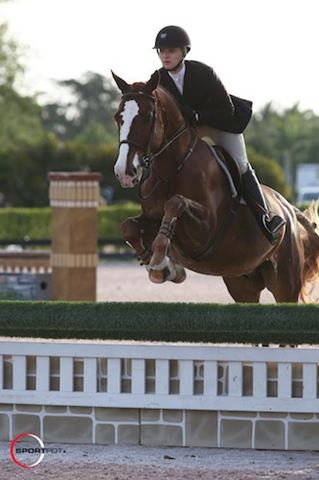 Since 2013, Boggus has made one major change in her riding program; she's no longer catch-riding a different horse each week of the show. Boggus still managed a number of top finishes last year with mounts that she had met that day in the schooling ring, but after making equitation superstar Papillon 136 her own this past fall, she was relieved to get into a routine.

"We're in the same program every week. We can work on stuff and move forward, not just trying to figure out how to ride the horse," Boggus explained.

She continued, "Last year, it was really hard. It gets very costly having to lease horses every single week. And you don't know them, you don't get to practice on them. You're just jumping in the schooling area and then winging it in the ring. This horse, even though I've only had him since November, he's so good and experienced. I can just focus on my equitation and know he's going to be there for me." 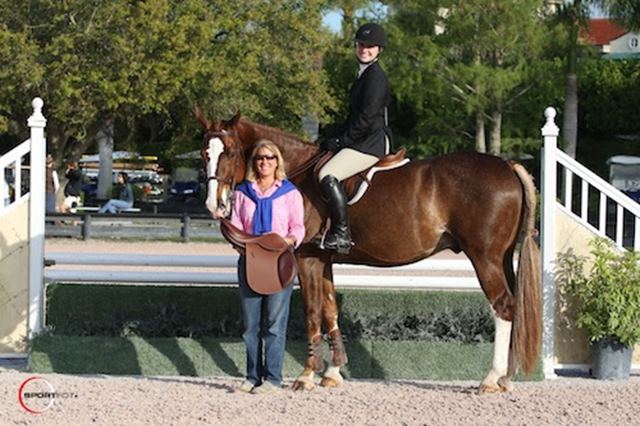 Rachel Boggus and Papillon 136 in their winning presentation © Sportfot

Of Papillon 136, Boggus said, "He's amazing. He obviously has all the experience in the world, he won the [Pessoa/USEF Hunter Seat] Medal and [ASPCA] Maclay finals with Jessica Springsteen. He knows all the tricks, so I just try to stay out of the way and let him do his thing!"